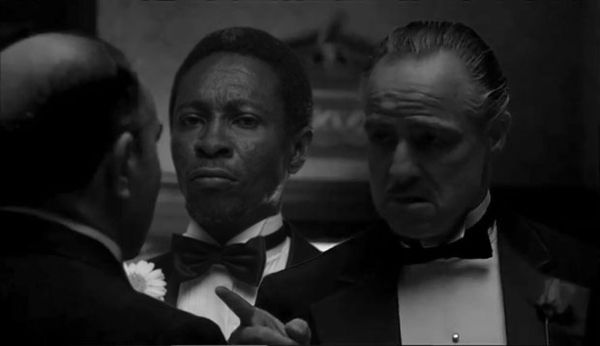 Farida Helmy — March 15, 2014 — Pop Culture
References: theplantationboy.blogspot & featureshoot
Share on Facebook Share on Twitter Share on LinkedIn Share on Pinterest
Taking on one of the most popular movies ever made, a Nigerian photographer Uche Okpa-Iroha humorously inserts himself in 'The Godfather' movie stills to shine light on racial issues of representation of certain races, or lack of representation, in mainstream media.

'The Plantation Boy' project by Okpa-Iroha uses humor and pop culture to gain attention on the still ongoing racial issues of representation of certain races or cultures.

"In order to question this, I decided to intrude into this space using simulation as a form of representation by proxy,” says Okpa-Iroha.

Painstakingly inserting himself in 40 stills, the final results look almost realistic with plans to continue the project with The Godfather parts two and three and the movie Amistad.

Okpa-Iroha chose The Godfather especially because he feels it "addresses some issues in society that border around marginal groups, especially in American society of the 1940s.”
3.3
Score
Popularity
Activity
Freshness
View Innovation Webinars