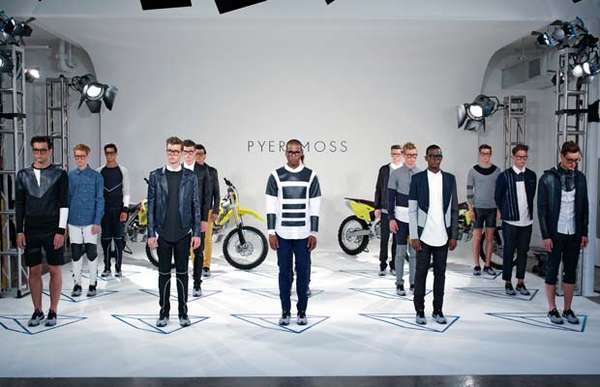 Thomas Wade-West — September 11, 2013 — Fashion
References: fashionising & complexmag
Share on Facebook Share on Twitter Share on LinkedIn Share on Pinterest
The Pyer Moss 2014 Spring/Summer Collection was recently revealed at NYFW and it included a lot of biker-inspired themes. For a brand that has only been in existence for a year, it is already known to be sported by celebrity clientele, including pop superstar Rihanna.

Designer Kerby Jean-Raymond’s interest in leather and motocross shines through in this year’s collection, including biker jackets, leather sleeves and leather pants. Other specific pieces include chinos and basic tees. The collection also includes mixed patterns and fabrics which include camo and geometric patterns, denim, cashmere and rich cottons.

For those looking to add some flair to their 2014 wardrobe, be on the lookout for some of these intricate, versatile pieces. The jackets in particular could work as a casual ‘date night’ piece, or used to put an edge on more formal attire.