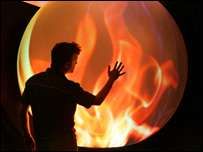 The Future Of Gaming?

Djemal — December 21, 2006 — Tech
References: pufferfishdisplays & news.bbc
Share on Facebook Share on Twitter Share on LinkedIn Share on Pinterest
What next for the world of gaming? The London Science Museum has been displaying the future technologies, as part of its 'Game On' exhibition (21 October 2006 - 25 February 2007), which we may one day find as commonplace in our homes. One of the exhibits on display in 'The Future Playground' was a giant inflatable sphere which was invented for among other things, to bring a whole new gaming experience for the fun-seeking gamers.

The Puffer Sphere is an inflatable ball normally 2 meters in diameter, but is versatile enough to be hung from the ceiling and be expanded to 10 meters for bigger spaces. The sphere originally surfaced from inventor Oliver Collier as an interactive art project while at university. The evolved Puffer Sphere now has the freedom to have any image projected onto it and opens up the opportunity for future games to be screened on it and interacted with. Imagine a boxing simulation in which you can 'punch' your opponent via the sphere â€“ and you get an idea of the future of gaming.

According to Mr. Collier, â€œIt's all about making virtual reality projection technology portable, accessible and robust, so it can take a bit of a kicking.â€

The interest generated in the Puffer Sphere resulted in Collier and some friends setting up a company to handle the marketing and enquires about the new ground-breaking invention. Some people have even expressed a desire to be placed inside the sphere as some kind of art project â€“ Interesting?