Producer To Destroy His Own Carrera GT For Movie 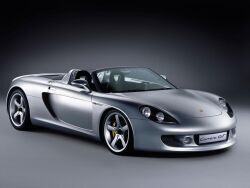 The film, shooting in Las Vegas and Chicago, also stars Nathan Phillips ("Snakes on a Plane") and Nadia Bjorlin ("Days of Our Lives"), and will feature a cameo from Wyclef Jean, who is scoring the movie.

But the biggest stars might be the personal car collection of the film's producer, real estate investor Daniel Sadek, who is financing the $26 million budget himself. Scenes will include his Phantom, Lamborghini Murcielago, Enzo Ferrari, Ferrari F430, Ferrari Scaglietti and two McLarens. In one sequence, a $200,000 Porsche Carrera GT will be destroyed.