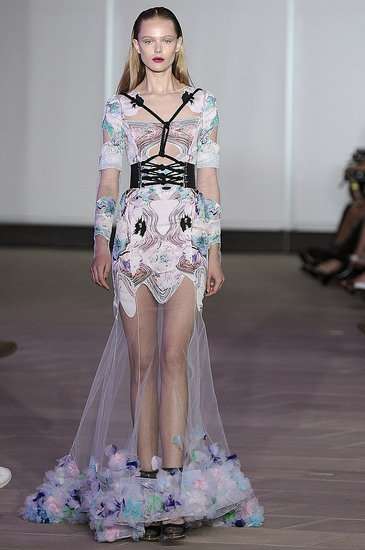 Souzan Michael — September 12, 2011 — Art & Design
References: fashionologie & style
Designer Prabal Gurung is no stranger to fashion that is a little bit avant-garde and out-of-the-box, but are still ultimately wearable, and the Prabal Gurung Spring 2012 collection is proof of the aesthetic appeal of the designer's looks.

Fusing feminine dresses with dominatrix-like details including mesh panels and leather belts, the designer ensured that the collection was sexy but not overtly so. Looking to Japanese photographer Nobuyoshi Araki to create the digitized floral prints and Zana Bayne to incorporate leather harnesses into the pieces, Prabal Gurung demonstrates that no one can do femme fatale fashion like he can.

The Prabal Gurung Spring 2012 collection was defined by the intricacy of each piece. Mesh panels and see-through tulle were prominent in each look, making even a floral-printed dress appear futuristic and precisely laser-cut.

While the collection surely is not for everyone, for those who can pull off these looks, the term "futuristic femme fatale" will surely be considered a great compliment.
6.2
Score
Popularity
Activity
Freshness