Cashing in on Palin Fever 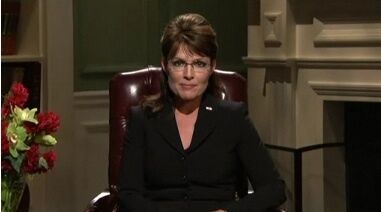 Sandra Winn — November 6, 2008 — Social Good
References: dailymail & nytimes
Share on Facebook Share on Twitter Share on LinkedIn Share on Pinterest
President-elect Barack Obama took the States by storm, campaigning has finished and the fat lady has sung; now McCain advisors are singing about their outrage over Sarah Palin’s wardrobe, acceptance of a prank phone call, “going rogue,” not knowing Africa was a continent, answering her hotel room door in a towel. Holy scandals!

According to the New York Times, McCain advisers disclosed that Sarah Palin was only to buy three outfits with the Republican National Campaign funds with a budget of $20k-$25k. However, Palin bought clothes and accessories for her entire family as well as for herself, and her shopping spree combined with a stylist’s fees for hair and makeup racked up bills totaling a whopping $150,000.

Sarah Palin, clearly going rogue, appeared many times over the course of the campaign to try and distance herself from John McCain. McCain did not want to bring up William Ayers, Jeremiah Wright, and other controversial Barack Obama acquaintances and friends, but Palin didn’t listen. Through fear tactics, she accused Barack Obama of “Palin’ around with terrorists.”

All of these accusations being made by top McCain advisers against Sarah Palin, of course come after the election results. The Palin camp is denying the claims.

The presidency has been won but Palin Fever is far from done.
5.6
Score
Popularity
Activity
Freshness
Jeremy Gutsche Keynote Speaker