50 Gifts for Kids
Next
Set of
Related
Ideas 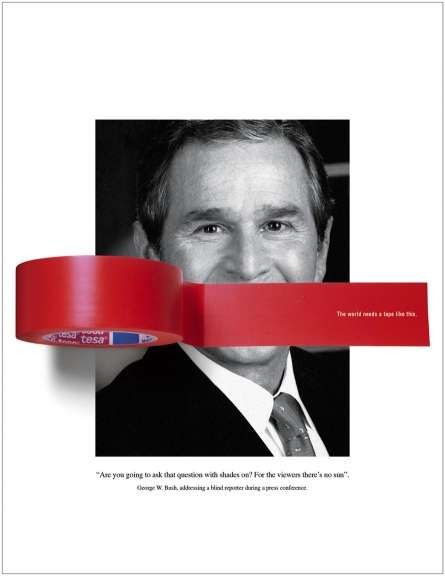 Four of our recent "great" world leaders are featured with one of their pretty "smart" quotes (of which there is an abundance) with red Tesa tape used to tape their mouth shut. The campaign was created by Heads Propaganda ad agency, Curitiba, Brazil. Art direction by Paulo de Almeida, creative direction by Kike Borell and Photography by Nuno Papp.

Here are the four featured quotes:

"Are you going to ask that question with shades on? For the viewers there's no sun. George W. Bush, addressing a blind reporter during a press conference."

"I am not a populist. I am a democrat. Hugo ChÃ¡vez, rebutting criticism of the press."

"Each one will give one's best for a fairer country, for a poorer country. JosÃ© SÃ³crates, Prime Minister of Portugal, addressing the Portuguese people."

"I am the best political leader in Europe and the world. Silvio Berlusconi, former Prime Minister of Italy, during a press conference."


Poor Bush can't catch a break, he was recently used in a bad light for the promotion of American Psycho movie premier in New Zealand: