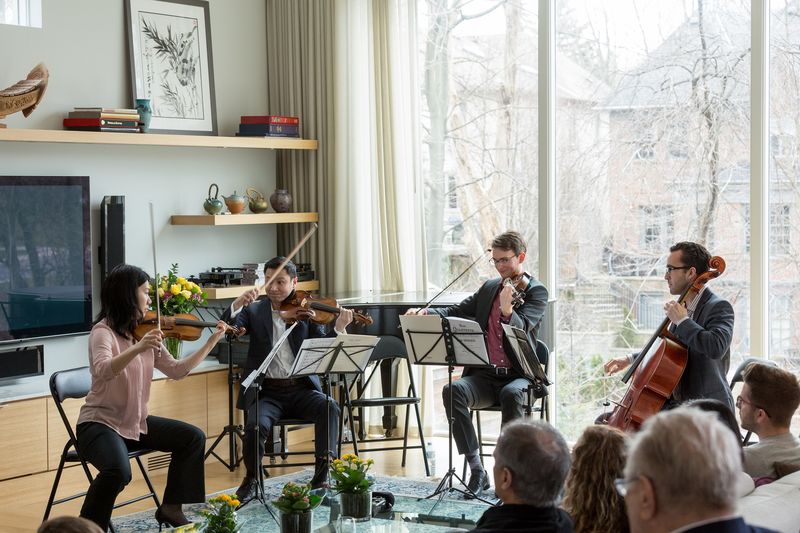 Katherine Pendrill — January 30, 2017 — Art & Design
References: facebook & pocketconcerts
Share on Facebook Share on Twitter Share on LinkedIn Share on Pinterest
While many people associate classical music with cavernous concert halls and hidden orchestra pits, a Toronto-based chamber ensemble called 'Pocket Concerts' is on a mission to change this perception. Instead of planning massive events in traditional musical venues, the company organizes pop-up symphony shows that have been praised for providing "an intimacy that’s hard to find in a concert hall."

Pocket Concerts was founded back in 2013 by Toronto violist Rory McLeod and pianist Emily Rho, out of a desire "to make classical music as accessible as possible." To accomplish this goal, the pair organizes more than 20 pop-up symphony shows per year in unorthodox venues across the GTA such as private homes, office buildings and even hair salons. With audiences ranging from just five people to more than 100, the events offer a unique take on the traditional concert experience.

Each Pocket Concert event consists of a thoughtfully curated program performed by a top-quality chamber music ensemble. The ensemble can range in size from two to eight performers and includes professional musicians from the Toronto Symphony, the National Ballet of Canada Orchestra and the Canadian Opera Company. Despite the all-star lineup, the events are far less formal than a traditional concert and offer an unprecedented level of interaction between the musicians and the audience. The events also go beyond the musical performance to include elements of storytelling, Q&A sessions and social contact -- all of which is designed to empower listeners in a truly memorable way.

In addition to private events such as birthday parties, anniversaries, fund-raisers and other celebrations, Pocket Concerts also hosts a monthly concert series that is open to the public. At these events, guests are able to get up close and personal with the performers and fully immerse themselves in the music. In short, Pocket Concerts gives guests a unique opportunity to feel as though they are truly a part of the performance instead of passively listening from afar.

By reinventing a timeless musical experience, Pocket Concerts is making classical music more accessible to Torontonians of all ages -- particularly younger fans who appreciate the social aspect of these intimate performances.