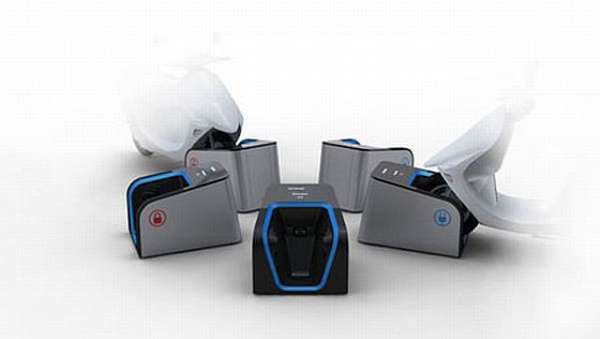 Michael Hines — July 13, 2011 — Autos
References: moronnoz & ecofriend
Share on Facebook Share on Twitter Share on LinkedIn Share on Pinterest
The use of electric two-wheeler in cities and towns would no doubt increase if a concept such as the Plug Project ever got off the ground. The Plug Project was created by two designers, Franck Magné and Alexandre Moronnoz, who have designed a charging lock for electric cycles and scooters.

Using the Plug Project's system is simple and requires only an installation of software onto the users EV to make it compatible with the lock/charger. Riders park their vehicle's front wheel into the stand where it is locked into placed and charged. To release the lock, simply validate your parking and scan it. This solves two of the biggest problems facing electric cycle and scooter riders: what to do with their vehicle when they aren't using it and where to charge it when its low on juice. The Plug Project is still just a concept at the moment, but I expect to see it, or something like it, appear in the paid parking lots of major cities sometime in the near future.
0.7
Score
Popularity
Activity
Freshness
Access Advisory Services