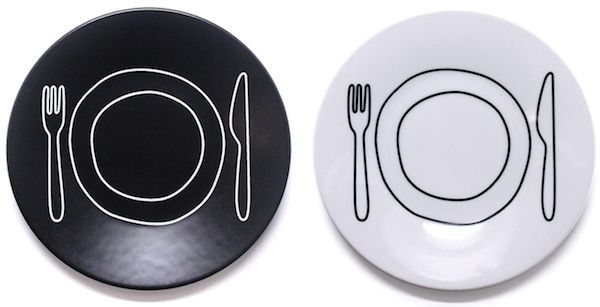 Meghan Young — November 6, 2013 — Art & Design
References: dshott & bookofjoe
Share on Facebook Share on Twitter Share on LinkedIn Share on Pinterest
A mother's rule regarding not playing with one's food is becoming harder and harder to follow thanks to dishware designs such as Plate-Plate by Duncan Shotten, a young British product designer based in Tokyo, Japan. Although not as artistic as some of the dishes that have been featured before, the minimalist illustration of a plate within a plate, complete with a knife and fork, is quite adorable.

Available in two different colors (matte black and gloss white), Plate-Plate by Duncan Shotten was recently featured at the 2013 Designboom Mart Tokyo as part of Tokyo Designers Week. It also comes in three different sizes (small, medium and large). The optical illusion is so charming, people will probably be compelled to get one of each. Who could resist?
0.9
Score
Popularity
Activity
Freshness
Jeremy Gutsche Keynote Speaker