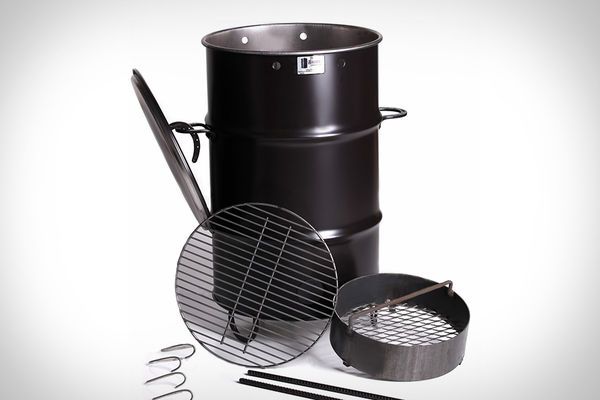 The Pit Barbecue from Pit Barrel Cooker Co. Resembles a Trash Can

Megan Facciuolo — April 20, 2014 — Lifestyle
References: pitbarrelcooker & uncrate
Share on Facebook Share on Twitter Share on LinkedIn Share on Pinterest
You can get perfectly cooked and smoked meat by using a pit barbecue. At first glance this one looks like something you would toss the bones from your wings in, but it's actually the device in which you would cook those delicious barbecued wings. The 30 gallon steel drum called the 'Pit Barrel Cooker' resembles a park's garbage can, but it's actually one of the best cookers on the market. It combines the qualities of a smoker, a slow cooker and a barbecue all in one.

It is a "vertical cooker," which is known to make tender meat without the need of constantly checking its temperature or smoke levels. The 'Pit Barrel Cooker' comes as a kit and in addition to the drum, it includes eight stainless steel hooks, two steel hanging rods, a charcoal basket, a grill grate, a stand and two packs of the Pit Barrel Co.'s original rubs.
5.5
Score
Popularity
Activity
Freshness
Attend Future Festival