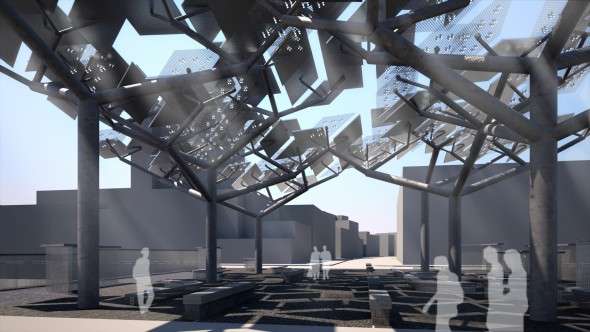 Pini @ Pigneto by GOMMAdesign is a Self-Sustaining Plaza

The Pont'e Pigneto Competition called for submissions to enhance an ancient bridge in the Pigneto neighborhood of Rome, and the solution suggested by this imaginative team of designers can boast many brilliant ideas that can all be considered as supremely resourceful. A public park would be established, full of paths, benches, moments of light and shade, and its structure and safety features will be completely sustainable.

Trees will be constructed of recycled metal scraps, and built up to improve the inner-city atmosphere. Extending from their branches will be solar panel leaves that will soak up sun during the day, and light the Pini@Pigneto by GOMMAdesign by night.
2.5
Score
Popularity
Activity
Freshness