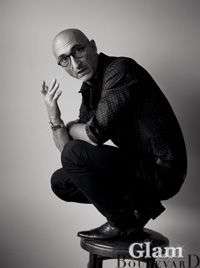 The first three styles from this collaboration, two tone pointed pump and sexy, strappy black stilletos will hit the stores tomorrow starting at £55. The capsule will be followed by a more extensive Spring/Summer 2008 collection, next year.

"As we launch our European collections in Gap stores for the first time, we are delighted to have the opportunity to build on successful past collaborations with a world class talent like Pierre Hardy and to offer his interpretation of Gap's casual aesthetic to our customers," said Stephen Sunnucks, president of Gap Europe, about Pierre Hardy's collaboration.

Hardy is also the chief creative director for the HermÃ¨s jewelry division and the designer behind Jean Paul Gaultier's and Balenciaga footwear. So ladies, get ready to queue!