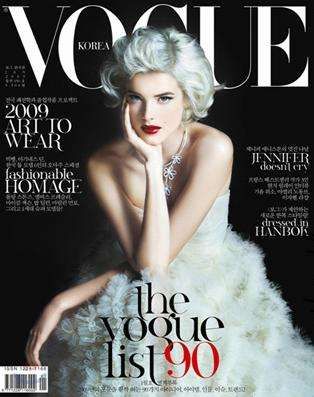 Supermodels and Stars Set the Tone For Bleached Tresses in 2009

Bianca — December 26, 2008 — Fashion
References: trendhunter
Share on Facebook Share on Twitter Share on LinkedIn Share on Pinterest
Agyness Deyn, perhaps the most glamorized bleach blonde of 2008, has inspired countless other fashionistas, both famous and not, to lighten their own locks to match her peroxide pixie ‘do. While Freja Beha Erichsen’s new style (seen on the cover of Vogue Nippon above) channels the classic look of Marilyn Monroe, Agyness’ look is much more Androgynous Andy than Bimbo Barbie, both styles demolishing a decades-old stereotype, pioneering a new look for a new year.

If you’re daring enough to reach for the bleach, you’d be also be daring enough to chop it off too—hair this blonde does not look pretty when it’s long. The old expression, “straw-like” blonde exists for good reason; just look at Mischa Barton, Amy Winehouse and Drew Barrymore in the gallery above. Then again, bombshells like Georgia Frost and Scarlet Johansson are blessed with locks that truly rock, even with peroxide!
2.4
Score
Popularity
Activity
Freshness
Jeremy Gutsche Keynote Speaker