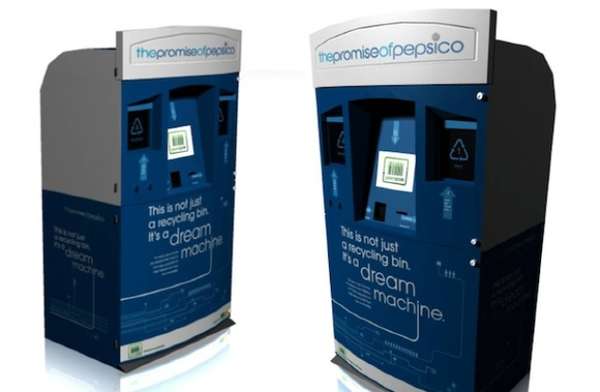 The Pepsi Dream Machine Prepares to Make Its Debut (UPDATE)

Michael Hines — March 6, 2011 — Eco
References: greenopolis & fastcompany
U.S. citizens will soon have no reason not to recycle thanks to the Pepsi Dream Machine. Pepsi has partnered with Greenopolis to put 363 Dream Machines in cities across the country.

The Pepsi Dream Machine is a recycling center that gives on-the-spot rewards for recycling. People who put in bottles and cans will be given a voucher that they can redeem at Greenopolis.com for vouchers and coupons to restaurants, hotels and even concerts.

In addition to the Dream Machines, Pepsi will also be putting up blue trash bins in the nation's capital to encourage people to recycle more. Pepsi doesn't offer rewards for putting your recycling in this bin; instead, it donates the proceeds from the bins to Entrepreneurship Bootcamp for Veterans with Disabilities.

Whether you're in it for the philanthropy or the money, recycling is about to get a whole lot more rewarding thanks to the Pepsi Dream Machine.
1.8
Score
Popularity
Activity
Freshness