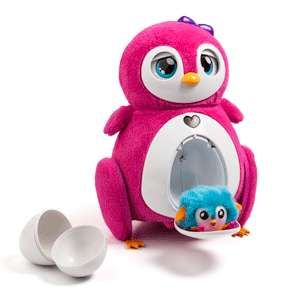 Many penguin featured films have popularized the bird, making this doll a fast favorite among children. Brightly colored, the bird interacts with people through touch and sound and responds to petting and will give out kisses. The doll is made even more exciting by the surprise baby inside of it. If you push on her heart, Penbo’s stomach opens up to reveal an egg, within which lies another doll named Bebe. You don’t know what color Bebe you will get; it could be blue, green or pink.