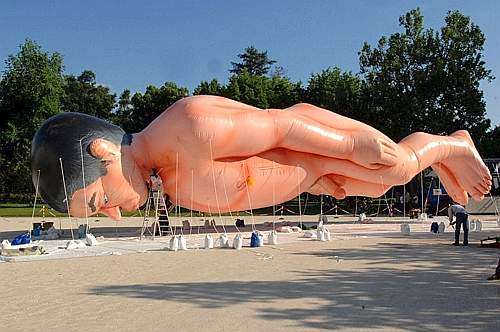 Pawel Althamer in the Milan Sky

designtrotter — May 8, 2007 — Naughty
References: stfrancis.it & designtrotter.it
Share on Facebook Share on Twitter Share on LinkedIn Share on Pinterest
From May 7th through June 5th, 2007, the Fondazione Nicola Trussardi in Milan, presents One Of Many, the first major solo exhibition in Italy by Polish artist Pawel Althamer. Pawel Althamer is among the most respected artists from Eastern Europe. In his sculptures, installations, performances, and videos Althamer portrays a world populated by everyday heroes, marginal characters and fragile martyrs. Pawel Althamer's obsession is the representation of the Human Being, shaken by ancestral fears, social tensions and hallucinated visions.