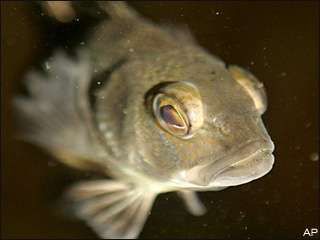 The fish swim into a net when they hear a tone signaling feeding time. The system could eventually allow depleted fish like black sea bass to be released into the open ocean, grow to market size, then swim into an underwater cage at harvest time when they hear the signal. This way, farmed fish might be better acclimated to the wild when they can be called to feed every few days. The big goal is to help with the costs of fish farming, an important source of the world's seafood. Trained fish return after several days of feeding saving the farms money on feed and reducing the fish waste released in concentrated areas.

According to the Associated Press: "What's next, teaching them to coat themselves in batter and hop inside a fryer?"