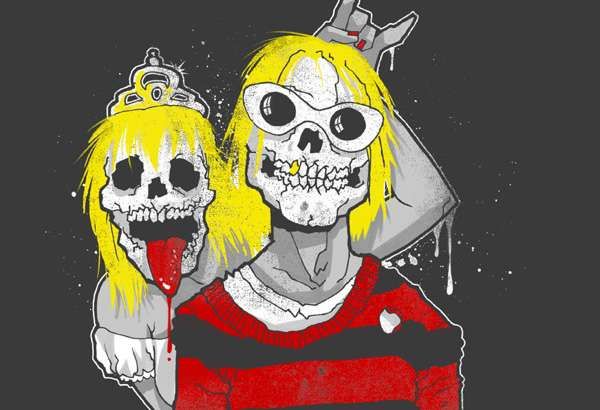 Jason Soy — January 30, 2012 — Pop Culture
References: paulorocker.deviantart & blog.thaeger
Share on Facebook Share on Twitter Share on LinkedIn Share on Pinterest
I guess the phrase, “Till death do us part,” actually applies to the couples in these rad Paulo Rocker illustrations. After all, the celebrity lovers in this music-inspired series have all had one of their lovers tragically die whilst the couples were still together. It's only fitting then that Paulo Rocker has drawn each pairing as skeletons rather than their flesh and blood selves.

The musician couples featured in this idiosyncratic Paulo Rocker series include Kurt Cobain and Courtney Love, John Lennon and Yoko Ono, Sid Vicious and Nancy Spungen and lastly, Johnny Cash and June Carter. Each set of lovers is rendered with badass vector graphics and would make pretty threatening, but cool tattoos. It’s incredible how Rocker still manages to capture each stars' personality despite only drawing them as bones.
5.8
Score
Popularity
Activity
Freshness
Jeremy Gutsche Keynote Speaker