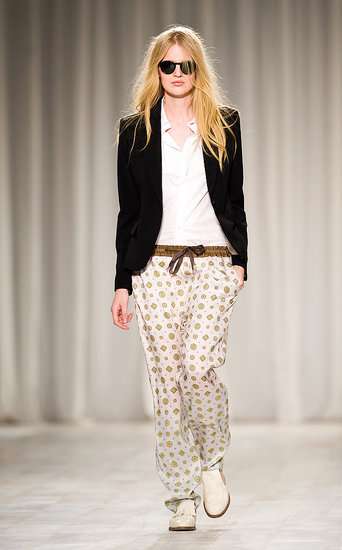 Souzan Michael — September 19, 2011 — Fashion
References: style & fashionologie
Share on Facebook Share on Twitter Share on LinkedIn Share on Pinterest
Drawstrings have never appeared as cool as they did in the Paul Smith Spring 2012 runway show. The models walked down the runway to music by the Velvet Underground, adding to the already 70s-inspired look of the collection, thanks to the round John Lennon-inspired sunglasses and cool, downtown girl fedoras.

Easy to wear staples are the highlight of the collection, including flat loafers adorning the feet of each model and completing the laid-back approach that Smith was clearly going for. The Paul Smith Spring 2012 collection is ultimately wearable and crisp, an impressive feat for the Brit designer to pull of while showcasing slouchy pajama pants, but somehow, he does it.

Soft silk shirts, including one that undoubtedly resembled sleepwear, with it being a striped, flowing button down, added a finishing touch to the easy-to-wear collection.
4.4
Score
Popularity
Activity
Freshness
Get the 2021 Trend Report FREE