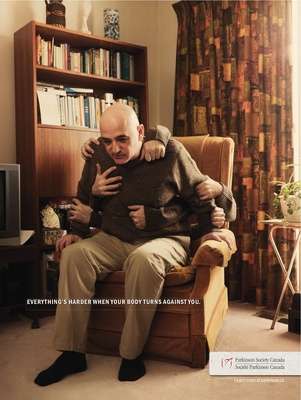 The ads, created for the Parkinson Society of Canada, include a series of images using the tag line, "Everything's harder when your body turns against you."

In the first image, a man sits in an arm chair with dozens of small hands all over his body, depicting what it's like to lose control of your fine motor movements and be restricted by your body's own limitations. The second is of a woman in a kitchen, with hands wrapped around her arm as she tries to have breakfast. The third is of a man trying to iron, again being held back by the dozens of hands protruding from his body.
2.2
Score
Popularity
Activity
Freshness
Jeremy Gutsche Keynote Speaker