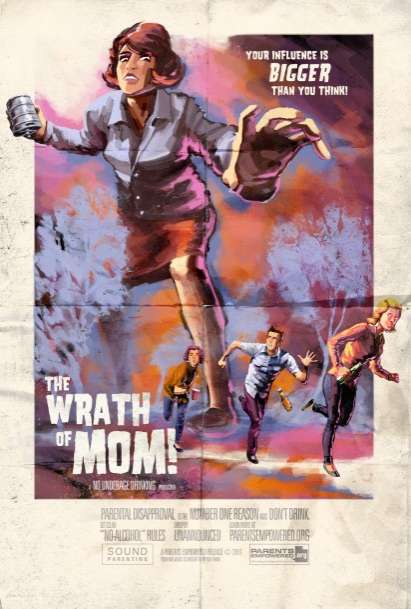 Meghan Young — January 15, 2012 — Lifestyle
References: rrpartners & ibelieveinadv
Share on Facebook Share on Twitter Share on LinkedIn Share on Pinterest
Evoking the wrath of one's parental unit can be as frightening, or perhaps more so, than an actual horror movie, which the Parents Empowered campaign references. Inspired by retro movie posters, this ad campaign depicts mothers and fathers as monsters. Though this may not be the best message to send children, the Parents Empowered campaign does show parents, "Your influence is bigger than you think."

Cleverly humorous, the Parents Empowered campaign was conceived and executed by Salt Lake City-based ad agency R&R Partners. Illustrated by A.J. Bell and copy written by both he and Mike Foster, the ad campaign features hilarious titles such as 'The Night Dad Lost His Head' and 'The Wrath of Mom.' It specifically addresses teen alcohol consumption since the children in them are dropping beer bottles left, right and center.
2.5
Score
Popularity
Activity
Freshness
Get Trend Hunter Dashboard