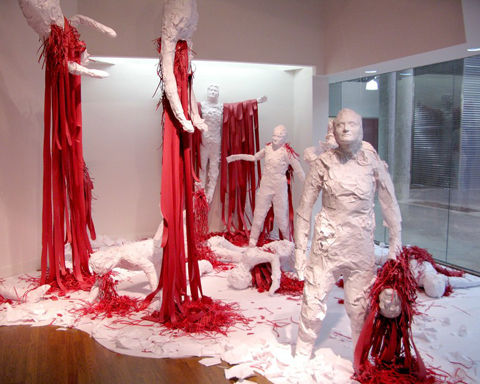 Megan Facciuolo — April 2, 2014 — Art & Design
References: nataliaarbelaez & sweet-station
Art student Natalia Arbelaez created a massacre out of what appears to be paper mache art. The popular art-form is used to create life-like sculptures frequently, but in this exhibit the sculptures are not lively at all. The majority of the sculptures appear to be murdered.

This work, titled 'Parchment Paradise,' shows what looks like a sociopath killer with all of his victims. The figures are all white, but bright red parchment paper is used to give a gory illusion. The victims are "dripping blood" while hanging from the ceiling and the "murderer" is holding a decapitated head.

Arbelaez works in ceramic, sculpture, and fiber; she uses her skills to tell stories like this one and explore controversial themes of reproduction, sexual differentiation, feminism, religion and nature.