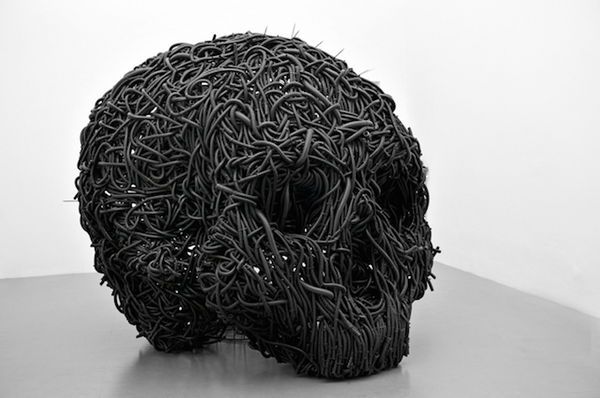 The Work of Paolo Grassino Balances Between Natural and Artificial

Meghan Young — May 12, 2014 — Art & Design
References: paolograssino & fubiz.net
Share on Facebook Share on Twitter Share on LinkedIn Share on Pinterest
Paolo Grassino manages to strike an interesting balance between what is natural and artificial in his work. Focusing mainly on all-black sculptures made out of rubber, polystyrene, wax and concrete, Paolo Grassino's creations may be constructed out of manmade materials, but they often depict animals and humans in conceptual ways.

Hailing from Turin, Italy, the sculptures of Paolo Grassino have found themselves not only in museums and art galleries, but also scattered around cities. By indulging in the latter, Paolo Grassino really draws comparisons between what is real and what is not. He encourages people to dwell on these often elusive concepts in order to stimulate creativity, imagination as well as a sense of life itself. From skulls and organs to deer and people, he embraces a lot of imagery.
1.5
Score
Popularity
Activity
Freshness
Attend Future Festival

Matchstick Space Station Sculptures
This Scale Model of the ISS Was Built with 282,000 Matchsticks