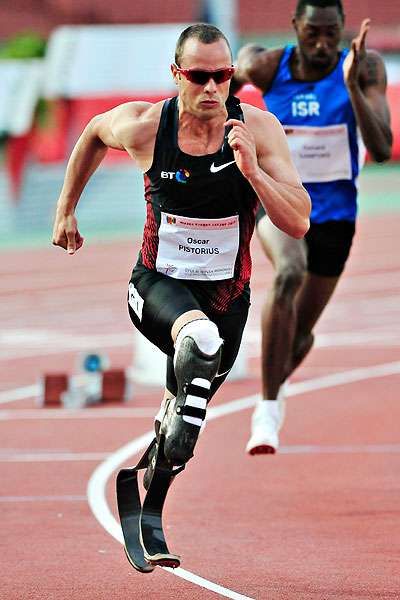 Omar Yusuf — August 9, 2011 — Lifestyle
References: espn.go & gizmodo
Share on Facebook Share on Twitter Share on LinkedIn Share on Pinterest
A native of South Africa, Oscar Pistorius will represent his home country for the first time in the 2011 World Championships amid controversy and unrest. Why the controversy? Because the runner, who is capable of clearing 400 meters in 45 seconds, is a double amputee with two carbon-fibre legs.

According to Olympics researchers, the pair of Cheetah Flex-Foot prosthetic legs worn by Oscar Pistorius give him an advantage of 30% efficiency over sprinters with flesh-and-blood legs. Unfortunately, the decision was overturned too late and the awe-inspiring athlete wasn't able to attend Beijing in 2008. But after smashing his previous records at a sprint meet in Rome, Pistorius is finally on the list to represent South Africa this year.

Along with Caster Semenya, who was subjected to a gender test, Oscar Pistorius is not the only athlete whose "humanness" was genuinely contested. But as prosthetic develops to allow more and more injured athletes regain their talent, the Olympic organizations will have to compromise eventually.
0.7
Score
Popularity
Activity
Freshness
Get Trend Hunter Dashboard