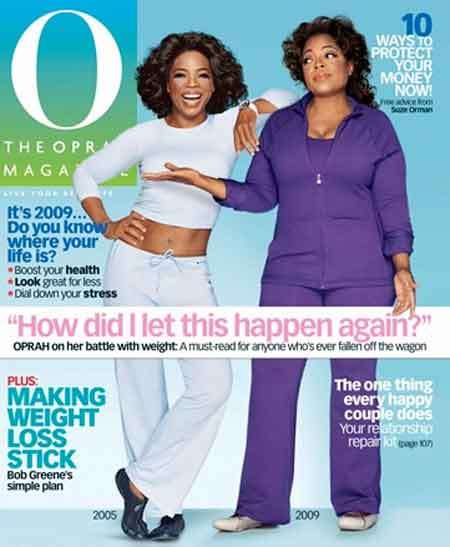 Bianca — December 10, 2008 — Lifestyle
References: coverawards & etonline
Share on Facebook Share on Twitter Share on LinkedIn Share on Pinterest
Oprah Winfrey is one of the most influential icons in American media, with millions looking to her for life guidance on a daily basis. For many, she was the inspiration for weight loss, but her dramatic weight fluctuation have made it difficult for her to be a positive role model. However, Oprah is making an effort to change the controversial media coverage of her weight struggles by openly admitting that she is has “fallen off the wagon.”

On the current cover of O Magazine, Oprah Winfrey is shown standing next to a much more svelte, firm-abbed image of herself in a cropped white shirt, the caption reading, “How did I let this happen again?” At 200 lbs now, she is regretting her recent 40 pound gain, confessing, “I’m mad at myself.”

In April, she skipped a Vega taping with Cher and Tina Turner because, as she says, “I felt like a fat cow,” and “I wanted to disappear.”

The video above is an ET special detailing the struggle Oprah Winfrey has, and continues to endure, with her weight.
4.8
Score
Popularity
Activity
Freshness
Get the 2021 Trend Report FREE