Top 50 Fashion Trends in March
Next
Set of
Related
Ideas 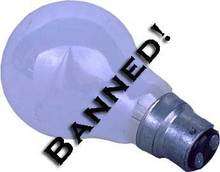 jagedge26 — April 19, 2007 — Eco
References: cbc
In a move echoing one made by Australia's Prime Minister less than two weeks ago, CBC News reports that Ontario premier Dalton McGuinty has announced that Ontario will also be phasing out standard incandescent light bulbs in an effort to curb global warming. The ban will go into effect by 2012, by which point, the price of LED lighting, which offers even greater environmental benefits than CF bulbs, may have dropped enough to make them an even better alternative. Though the announcement was most likely politically motivated, and isn't nearly as groundbreaking as it would have been only three weeks ago, it is still a welcome step in the right direction.
4.4
Score
Popularity
Activity
Freshness