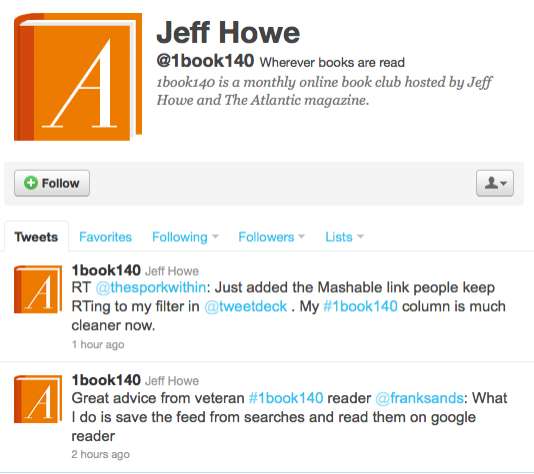 Jaime Neely — May 28, 2011 — Social Media
References: mashable
Readers all from all corners of the world can now virtually participate in an online book club thanks to journalism professor Jeff Howe and the editorial staff at The Atlantic. The online book club functions just as any other normal Twitter account would; Twitter users can follow the account @1book140 to participate in the online book club, which will consist of open, virtual discussions concerning the books chosen for the club.

This Twitter-based online book club is an extension from a previous account powered by the same idea that was called 'One Book, One Twitter.' The way 1book140 works is that Twitter followers of the account will vote for the books that they want to be included in the club. Over 1,400 votes were cast to select the first book to be read of the club; Margaret Atwood's book took the cake. This online book club is simple to join and a great way to get it on some popular book buzz and get the names of some great summer reads.
0.7
Score
Popularity
Activity
Freshness

Robert Boswell, Author of "The Heyday of the Insensitive Bastards" (INTERVIEW)