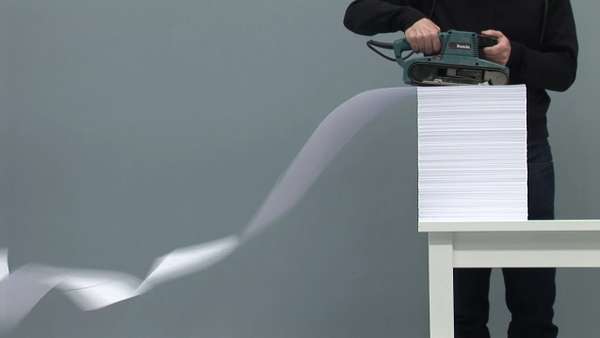 The Wood and Harrison 'One More Kilometre' Film Sands Stacks

Jordy E — April 8, 2012 — Art & Design
References: harrisonandwood & todayandtomorrow.net
Artistic duo John Wood and Paul Harrison have explored the realms of live paper art within their mini-film 'One More Kilometre.' While the title may not relate to the project directly, the piece quickly depicts an anonymous man with a sanding machine and a stack of paper. The rest unfolds seamlessly.

The One More Kilometre short picture seems slightly peculiar at first, especially since industrial wares like a sanding machine are rarely used in the production of art displays. Despite the norm however, the genius behind the venture is readily apparent. The man holding the tool spends just under three minutes cutting down a large pile of paper and incredibly enough, the pieces come off the stack almost effortlessly, forming a beautifully twisted ivory chain. Who knew that paper deconstruction could be so alluring?