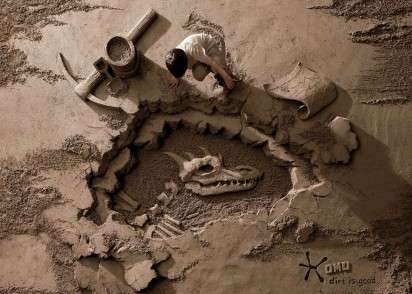 Meghan Young — June 13, 2012 — Marketing
References: loweandpartners & ibelieveinadv
Share on Facebook Share on Twitter Share on LinkedIn Share on Pinterest
The OMO Dirt is Good ad campaign appears to be living by the common motto, 'If you can't beat 'em, join 'em.' Nevertheless, it doesn't advocate that people should throw in the towel and live like dirt balls for the remainder of their lives. Instead, it shows that dirt is a natural part of life and shouldn't stop people from enjoying their time on earth doing simple things like sitting on a bench enjoying a summer day, indulging space adventure fantasies or going on an architectural dig.

Conceived and executed by Lowe, an ad agency based in Singapore, the OMO Dirt is Good ad campaign depicts those very scenarios through soiled scenes. Instead of being disgusted, the people starring in the ads are happy and content--especially knowing that there is a product that can remove daily stains.
5.1
Score
Popularity
Activity
Freshness
Get Trend Hunter Dashboard