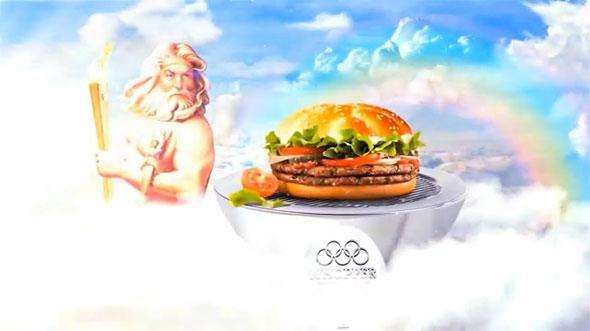 Susan Keefe — September 16, 2011 — Lifestyle
References: adverblog
Share on Facebook Share on Twitter Share on LinkedIn Share on Pinterest
This adorable Olympic Whopper spec commercial is delightfully irreverent and insightful. This playful take on fast food marketing is the handiwork of students Ilya Malyanov and Christian Feist. Both attend the renowned Miami Ad School Europe in Berlin. Taking inspiration from the seemingly endless flood of promotions courtesy of burger-flinging companies everywhere, the pair have created a potent editorial jab at the ridiculous array of fast food burgers that arrive in the marketplace every year.

It seems that fast food sandwiches get crazier and crazier with each new menu item. From the Baconator to the Double Down, fast food companies will stop at nothing to grab consumers' considerably divided attention. By creating this mythical burger cooked on the Olympic flame, Malyanov and Feist not only capitalize on the growing excitement that is circling around the upcoming Olympics, they also share an inclusive and hilarious joke with jaded consumers everywhere. Now, only one question remains: would you eat an Olympic Whopper?
2.1
Score
Popularity
Activity
Freshness
View Innovation Webinars