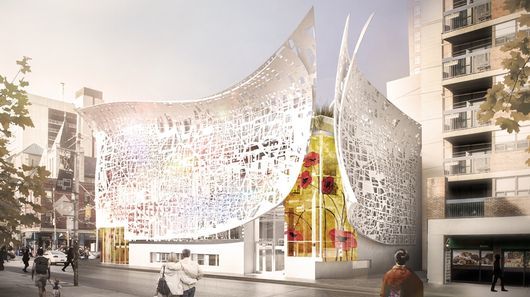 This OCAD University Building in Toronto Will Have a Readable Facade

Rahul Kalvapalle — June 5, 2015 — Art & Design
References: bortolotto & gizmag
Share on Facebook Share on Twitter Share on LinkedIn Share on Pinterest
Toronto's Ontario College of Art and Design, or OCAD as it's better known, is set to see one of its buildings wrapped in an interactive facade. The south-east corner of the institute's main office building will feature a facade whose design is based on mapping data from the surrounding area, with passers-by able to read information embedded in the facade simply by photographing it.

Designed by Bortolotto architects, the facade will be made of aluminum panels mounted on a metal subframe. The pattern will be applied via water-jet cutting, giving it a perforated appearance.

To create it, several of the city's museums, galleries, studios and art stores were mapped and geographical data re-oriented to make it fit on the facade. Ultimately however, this is a project that aims to engage the local community and inspire them.
1.9
Score
Popularity
Activity
Freshness
Attend Future Festival Virtual