Most Followed People on Twitter
Next
Set of
Related
Ideas 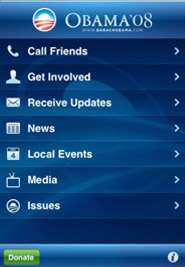 Ayman — October 3, 2008 — Social Good
References: my.barackobama
Share on Facebook Share on Twitter Share on LinkedIn Share on Pinterest
While Sarah Palin struggled to answer important questions about her stance on political issues such as the Bush doctrine and her running mate’s record, the official Obama campaign is so confident in Barack Obama they released an official free iPhone and iPod touch application that gives voters detailed and comprehensive understanding of Obama’s positions on important issues. It also provides instant local and national campaign news, photos, and video on the go.

In addition to receiving news and updates about the Obama campaign, the applications provides easy volunteering tools for those who want to be proactive and support Obama. The “Call friends” feature rearranges and prioritizes your contacts by key battleground states.

The most important feature however is “Issues”, which provides direct and clear facts about Barack Obama and Joe Biden’s positions and plans on the essential issues.
2.1
Score
Popularity
Activity
Freshness
View Innovation Webinars