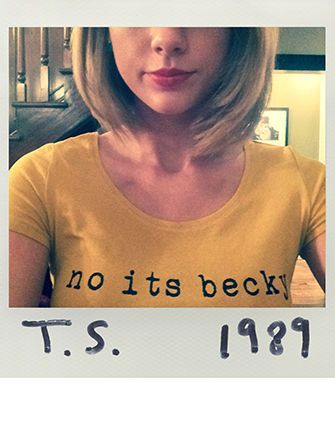 Taylor Swift's 'No Its Becky' Shirt Has Broken the Internet

While the phrase seems innocuous -- and a little nonsensical, I mean we all know it's Taylor Swift in that t-shirt -- it actually has a hilarious history. The phrase comes from a meme that originated on Tumblr. One user posted an old picture of Swift, accompanied by a "horror" story about her former friend Becky, a "happy, popular girl" who met her tragic demise after "snorting marijuana at a party." When a fellow Tumblr-user suggested that the girl in the photo might actually be Taylor Swift, the adamant poster replied, "no its becky." Well, that's that, I guess!

Swift showed that she's in on the joke by donning the t-shirt, sending the Internet into a frenzy in the process.
1.8
Score
Popularity
Activity
Freshness
Get Trend Hunter Dashboard