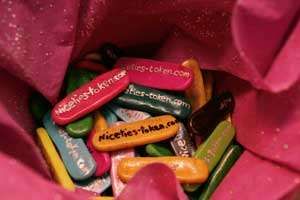 Djemal — November 23, 2006 — World
References: niceties-token & news.bbc
Share on Facebook Share on Twitter Share on LinkedIn Share on Pinterest
Londoners have a bad reputation around the globe where they are generally regarded as cold, unfriendly, and sometimes rude. They are seen as people who mostly keep themselves to themselves and are not usually associated with random acts of kindness or smiley face characteristics.

An entrepreneur aims to change all that with her new Niceties project which was recently launched in London's party zone, Soho. Liz Akers, 28, came up with the idea after becoming sick of rudeness on her commute to work and is now on a mission to put smiles on the faces of Londoners and ease any signs of the historical 'stiff upper lip'.

'Niceties Tokens'
At the Soho launch, multi colored Niceties Tokens were handed out and are now circulating around London. The clay token is a reward given to someone who has shown random acts of kindness or who has just been 'nice' or 'friendly', which they are then encouraged to pass on to others for similar actions.

â€œEach token has an individual name and set of markings, and the recipient can log on to a website to record how, where, and why they got it, and read about who has had it before themâ€.

Ms Akers and her friends 'Team Nice' sees the project as a way to unmask the true nature of Londoners, which she said is not naturally rude, just a bit grumpy and afraid of making contact.

And those people in places other than London who are smiling at the thought of commuting Londoners being accosted by Team Nice brandishing ear to ear smiles and being ultra nice, can wipe that grin off their faces, as there is talk of plans to increase the members of Team Nice and spread the 'Niceties Tokens' and niceness throughout the country and abroad.