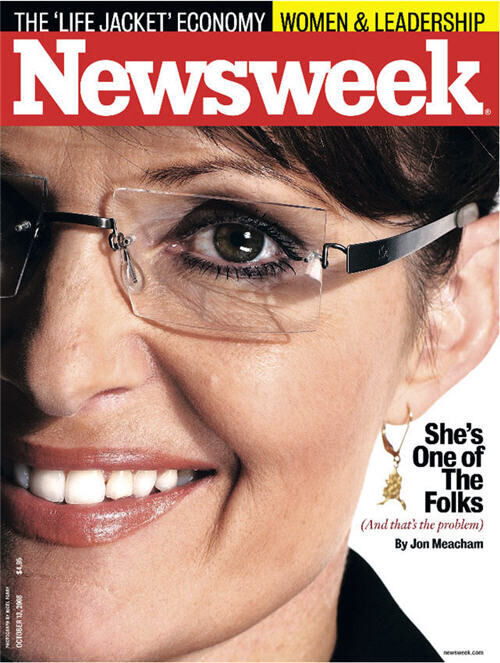 Sandra Winn — October 8, 2008 — Social Good
References: newsweek
Share on Facebook Share on Twitter Share on LinkedIn Share on Pinterest
This week’s Newsweek cover photo shows governor and GOP Vice Presidential nominee, Sarah Palin in a way that many are not accustomed to—she isn’t all glammed-up. The Newsweek cover is, according to conservatives, an unflattering close-up.  Palin’s picture has obviously not been touched up or airbrushed, and a few wrinkles, bags and crows-feet under her eyes, a pimple, as well as lip hair can be seen.  The headline beside the picture is non-flattering as well and reads, "She’s one of the folks (that’s the problem).”

The controversy, according to Andrea Tantaros, a Republican media consultant, is that Newsweek photos of Obama have been retouched to make him look good.  Tantaros also said that the cover of Sarah Palin is a “slap in the face after so many Newsweek covers have been favorable to Obama.” In her interview with Fox News, Tantoros calls for “regular folk” to cancel their Newsweek subscriptions.

Julia Piscitelli of American University, who was also interviewed by Fox News, has a different outlook.  Piscitelli says the first thing she noticed on the Sarah Palin Newsweek cover are Palin’s beautiful brown eyes and thinks the tilt of her head portrays a nice “folksiness.”

Since Sarah Palin keeps referring to herself, and John McCain for that matter, as a “Maverick” and an everyday person in hopes of getting the “Joe six pack and hockey mom” vote, perhaps this photo will help her connect with those voters that she seems to be targeting the most.

I understand why conservatives are troubled and feel that Newsweek is attacking Sarah Palin both on the cover and within the story.  However, love Sarah Palin or hate her, despite not having any touch-ups done at all, and even though Palinophiliacs are crying foul—many women can only hope to look that good in their forties.
6.8
Score
Popularity
Activity
Freshness
View Innovation Webinars