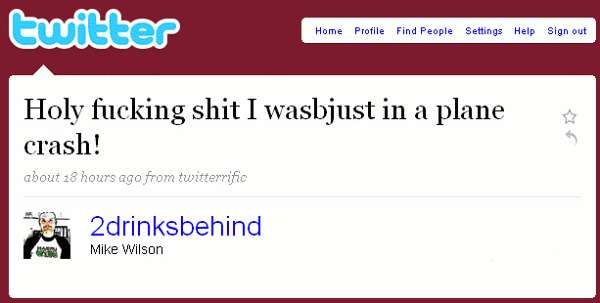 Alex Covert — December 22, 2008 — Tech
References: twitter & yesbutnobutyes
Share on Facebook Share on Twitter Share on LinkedIn Share on Pinterest
If you were awake yesterday, you undoubtedly heard about the plane crash in Denver. In breaking-news-style, it was covered and recovered with conflicting facts and second-person accounts of speculation. However, if you use Twitter and are friends with Mike Wilson, aka @2DrinksBehind, then you would have read firsthand accounts of the crash, live from his cellphone. Obviously, he was a little shaken up.

Thankfully, no one was killed in this accident.

Implications - Social media sites provide real-time interaction for its users, and because of this feature many consumers receive instant news and product information from it. Businesses can capitalize by investing in using one of these sites so they have a platform in which to reach this young generation of social media site users.
2.2
Score
Popularity
Activity
Freshness
Get the 2023 Trend Report FREE