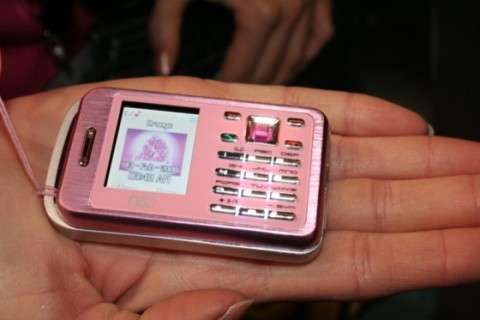 Bianca — February 14, 2008 — Tech
References: stuffbyneo & slashgear
Share on Facebook Share on Twitter Share on LinkedIn Share on Pinterest
This petite little mobile phone is about as tiny as it can get while still proving functional. The baby phone, the Neo 808i, comes in real brushed aluminum casing in pink with silver accents and black with touches of red and features a keypad that almost resembles precious gem stones.

The camera phone features MP3 and MP4 players, has tri-band GSM/GPRS, audio and visual recorder, FM radio, 128 MB Micro SD Card (which can be expanded to 4 GB) and of course all the fun trinkets like games, an image editor, health feature and currency and weight/length converters.

It's been such a success, the Dubai company is already working on four future innovations which should be released by the end of 2008. Some concepts in the works include the Neo-Ellipse and the Neo-Flip.

"The next in line will be the Ellipse which is due to launch in June 2008,"Neo says. "This we believe is no longer a phone but more of a sculpture. And that is how we will make sure it remains by the time we are done with fitting it with every single feature a phone should have. With its high gloss finish and hidden screen + camera and its Chrome finish elevated spine, it will hardly look like a phone when sitting on your desk. The phone will feature WiFi, Bluetooth, Quad band, and much more."
2.2
Score
Popularity
Activity
Freshness
View Innovation Webinars