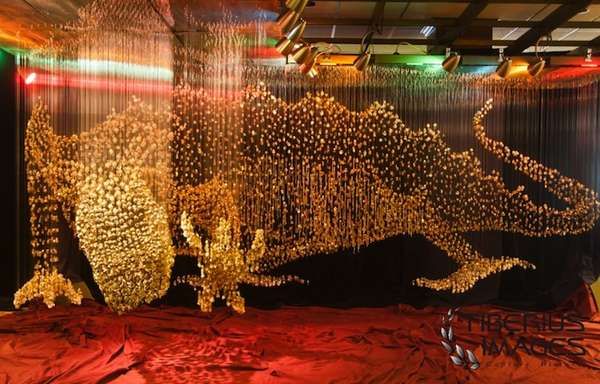 Nelligan the Dragon by Robin Protz is Made out of 40,000 Buttons

Meghan Young — October 4, 2012 — Art & Design
References: robinlou & mymodernmet
Share on Facebook Share on Twitter Share on LinkedIn Share on Pinterest
Nelligan the Dragon is a stunning art installation made out of 40,000 golden buttons. Strung from the ceiling on 4,000 fluorocarbon lines, each button comes together to take on the magnificent form of the legendary creature. Strikingly serpentine, the buttons may give it a surreal, ephemeral aesthetic, but it almost looks as though Nelligan the Dragon is on the verge of rearing its head and whipping out its tail.

Created by Robin Protz, an artist based in Avon, Connecticut, Nelligan the Dragon is currently on display at the Amway Grand Plaza. Taking over three years to create, Protz writes, "Being a legendary creature that has major spiritual significance in almost every culture worldwide, Nelligan is representing the primal forces of nature, religion and the universe." The sculpture was named after a schoolmate who died of leukemia.
5.1
Score
Popularity
Activity
Freshness
Attend Future Festival