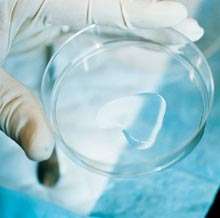 Ayman — May 12, 2008 — Unique
References: technologyreview
Share on Facebook Share on Twitter Share on LinkedIn Share on Pinterest
Vampires are so gonna be pissed off at a startup called Arch Therapeutics which has licensed nanostructured material technology that instantly stops bleeding from MIT. When poured over a site, the material will stop the bleeding almost at once. Arch Therapeutics is currently developing manufacturing processes for mass producing the material in large amounts.

Pending Food and Drug Administration approval, the first application would be for use during surgery to quickly stop and even prevent bleeding in the first place. This could be extremely useful in a variety of surgeries, including brain, heart, and prostate.

In addition to saving time, which is a critical factor in the outcome of a surgery, the material could decrease the need for transfusions and reoperations to control bleeding and also reduce the risk of infection.
2.9
Score
Popularity
Activity
Freshness
Get Better and Faster