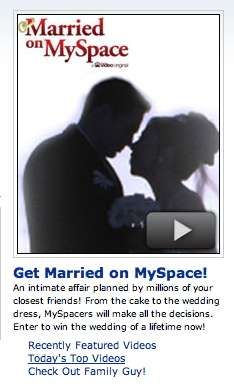 From Online Dating to the 'Married on MySpace' Show

You simply have to visit Myspace.com/MarriedOnMyspace to apply. The web series is expected to last 13 episodes until the day they say â€œI doâ€.

Implications - Playing off of popular television shows such as The Bachelor and The Bachelorette, the company has attempted to grasp the attention of that target group. By doing this, the company hopes to increase traffic to their site over their competitors. They also try to capture a target group that thrives off of the romanticism the show carries.
1.1
Score
Popularity
Activity
Freshness
Access Advisory Services