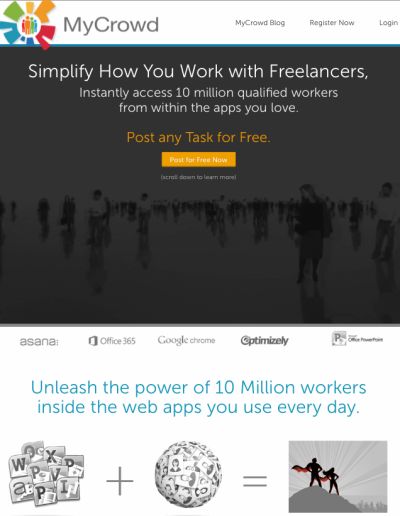 'MyCrowd' Connects Freelance Workers with Companies in Need of Help

Rahul Kalvapalle — May 10, 2014 — Tech
References: mycrowd & techcrunch
Share on Facebook Share on Twitter Share on LinkedIn Share on Pinterest
MyCrowd is an app that allows people and companies to search for, identify and hire freelance workers with a single click. The app uses Google Docs, Microsoft PowerPoint and other common software application to help connect freelance talent with freelance opportunities without requiring anyone to even leave the app.

MyCrowd, which currently has 10 million freelancers in its database, is bidding to tap into the growing demand for freelancers. The company claims that there are 40 million freelance workers in the U.S. alone, and that 30% of Americans could be freelances 10 years from now. The app also encourages US-based companies to hire freelance talent within the country rather than deal with the complexities of outsourcing work overseas.