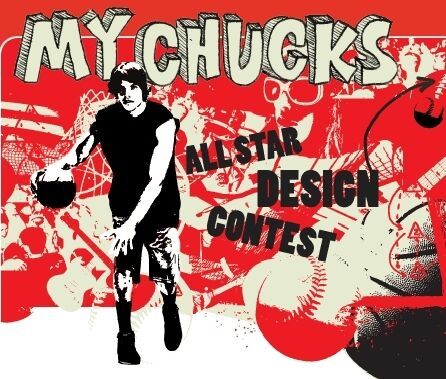 Ayman — May 11, 2008 — Fashion
References: mychucks.eastbay & boston
Share on Facebook Share on Twitter Share on LinkedIn Share on Pinterest
Converse has teamed up with Eastbay and Utah Jazz Basketball star Kyle Korver to launch MyChucks, a contest inviting participants to design a Chuck Taylor All Star shoe with the chance to win the ultimate prize of having their shoe produced by Converse and sold exclusively by Eastbay.

The Chuck Taylor All Star shoe is one of the most iconic sneakers which has been worn by numerous music, sports, art and fashion icons. Contestants will have the chance to bring their own creativity and artistic designs to the Converse canvas and showcase their design to the world.

According to the press release, Kyle Korver submitted his own design of the Chuck Taylor All Star shoe which will be featured online, along with a video of him designing his shoe and explaining the process. Korver's shoe features pinstripes to represent all of the people in his life, and a red stripe to represent himself and his desire to be an original. Converse will produce 226 pairs of the shoe, which pays homage to Korver's jersey number 26, and will be donated to the Kyle Korver Foundation, whose mission is to make a positive impact on the lives of under-privileged children by improving the quality of life for disadvantaged youth and their families.

To enter, contestants can visit mychucks.eastbay.com to download the entry kit which contains a silhouette of the Chuck Taylor All Star shoe and contest instructions. Participants need to submit a scanned image of their design and a 20-30 second video explaining their entry. Submissions will be placed in an online, public gallery where visitors can vote on each design. Visitors to the website can also register for a chance to win a new pair of Chuck Taylor All Star shoes every day between April 28 and July 6.

The top five designs with the most votes will enter the final round of judging which is determined by the total number of votes, and the judging of artistic ability, creative expression and overall design by a panel from Converse and Eastbay. The Grand Prize will be announced on or about July 11, 2008 on mychucks.eastbay.com. The winner will be flown to Converse headquarters to work with designers and developers and create the final version of the shoe, which will be produced and sold on Eastbay.com beginning in January 2009. To be eligible for the MyChucks contests, participants must be at least 18 years of age, a U.S. resident and enter their design by June 8, 2008.

I really wish that Converse would have opened the contest worldwide like the recent Hugo contests and not limit it to US residents only. We're living in a borderless world, why limit the creativity.
3.7
Score
Popularity
Activity
Freshness
Attend Future Festival