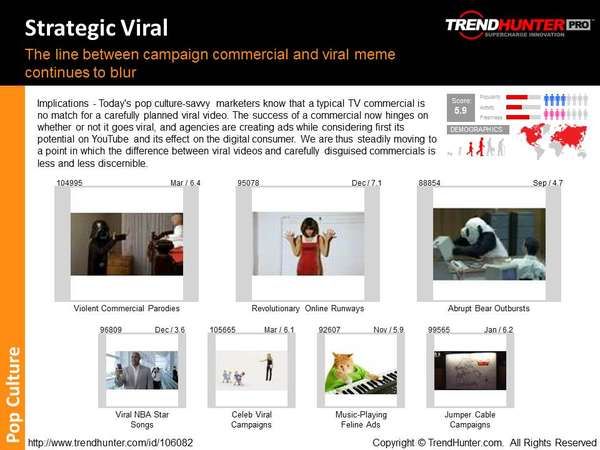 Learn How Artists Retain a Massive Fanbase with Self-Branding Visuals

Taylor Keefe — March 9, 2012 — Pop Culture
References: trendreports
Share on Facebook Share on Twitter Share on LinkedIn Share on Pinterest
The days of watching innovative, inventive and down right entertaining music videos on MTV are long gone, as priorities in programming paved the way for shows like 'Jersey Shore' and '16 and Pregnant,' all but eliminating the need to broadcast videos. However, the rise of social media has given artists another medium for getting their products to the masses. Use the Music Video Trend Report to not only uncover the best videos to entice audiences, but also learn how to effectively release, promote and produce shorts.

There was a time where music channels like MuchMusic and MTV continuously played music videos, taking up hours in scheduled programming. Today, music videos are a rare sight on television. But thanks to social media sites like Twitter, Tumblr and YouTube, artists can upload videos -- from big budget productions to homemade clips -- and still manage to garner millions of views. Suffice to say video killed the radio star, but now it's social media killing the video star, as consumers flock to artists that make more of a connection with fans via music videos and social media.
1.3
Score
Popularity
Activity
Freshness
Get Trend Hunter Dashboard