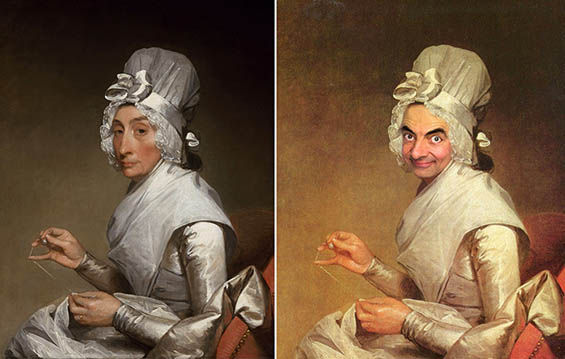 Meghan Young — October 4, 2014 — Pop Culture
References: rodneypike & beautifuldecay
Share on Facebook Share on Twitter Share on LinkedIn Share on Pinterest
Mr. Bean, the alias of British television star Rowan Atkinson, is known for his slapstick comedy and hilarious dumbfounded expressions. It is only appropriate, then, that someone would see the true potential of Mr. Bean's persona by replacing the faces in famous paintings with his own. The results are incredibly entertaining, thanks in large part to his singular attributes.

Wide-eyed and shocked or comically pleased, Mr. Bean is flawlessly inserted into these classic works of art as though he modeled for them himself. Instead, caricature artist Rodney Pike did all the work with the help of his trust Photoshop program. Pike says, "I think it just adds to the absurdity when working with such serious source material and Rowan Atkinson can make any situation funny no matter how absurd. He’s always lots of fun and it is good therapy and a welcome break to the stresses of work sometime.”
6.9
Score
Popularity
Activity
Freshness
Attend Future Festival

Camouflaged Art Collections
Liu Bolin Camouflages Himself in The 'A Colorful World?' Collection