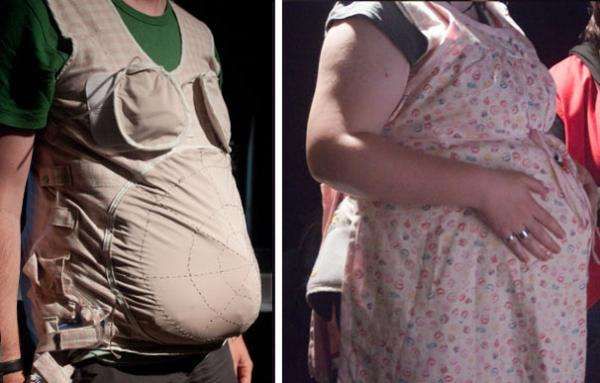 It’s an interactive, torso-hugging top that simulates pregnancy by allowing the user to feel the faux-fetus’s temperature, movement and heartbeat. It even allows the wearer to communicate with the fetus via belly-patting! Soft, rubbing movements elicit calm responses from the fetus, whereas quick, jerky movements cause the fetus to experience physical distress.

After a few minutes of wearing, the Mommy Tummy’s belly and breasts will change in both size and shape, simulating growth over 9 months as the pregnancy comes to term. An auxiliary screen displays a 3-D model of the fetus and charts changes in mood and activity levels during development.

To get that realistic feeling, Takayuki Kosaka’s team simulated two types of fetal movement -- kicking and wiggling -- using a technique adopted from Georg von Bekesy’s tactile funneling illusion. To put it simply, the wearer’s physical vibrations cause an electric stimulation in the suit-baby.

Surprisingly, I don’t think we’ll be seeing it on the runways of fall fashion week. But it might just make its way into the closets of some of the world’s more empathetic fathers-to-be.
4.2
Score
Popularity
Activity
Freshness
Attend Future Festival