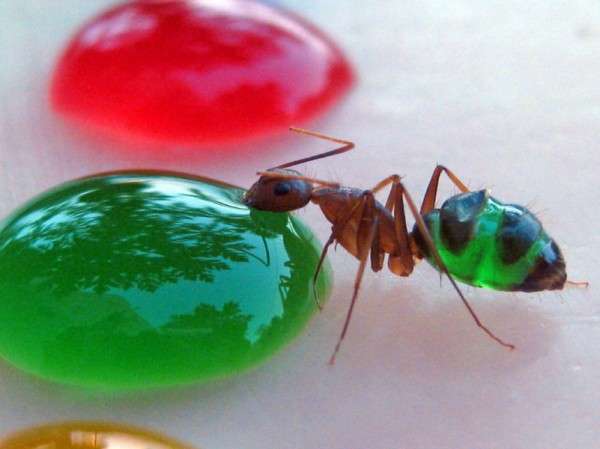 Corinne Guirgis — August 8, 2011 — Lifestyle
References: thisiscolossal
Share on Facebook Share on Twitter Share on LinkedIn Share on Pinterest
If crawling critters creep you out, you might change your mind after seeing the translucent ants of Mohamed Babu. The Indian scientist gave the ants brightly colored sugar drops and and photographed them as their transparent stomachs matched the food they were eating. He got the idea after his wife showed him some ants that stomachs turned white after sipping on some spilled milk.

Some of the more restless ants even moved from color to color, creating a funky mix of colors in their stomachs. Babu found the ants preferred lighter colors like yellow and green, and that the darker drops had little-to-no takers. One of the stranger experiments involving the creatures, Babu is certainly making waves for his clever marriage of art and science.

Implications - Although science and art are two opposing worlds, art that incorporates elements from a variety of industries appeals to the largest body of consumers with diverse interests, often generating a great deal of public buzz and media attention.
4.9
Score
Popularity
Activity
Freshness
View Innovation Webinars