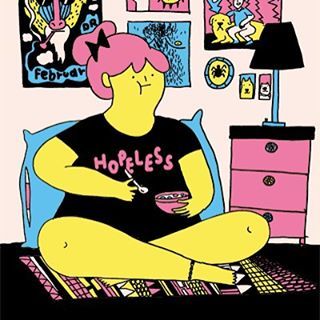 These Illustrations Depict the Internal Life of a Modern Woman

That's what these little comics by French artist Cecile Dormeau illustrate. On the cartoonist's Tumblr page, hilariously titled 'Blob,' visitors will find colorful, playful images of a modern woman in her natural habitat. Some of the illustrations make fun of media concepts and day-to-day insults targeted at women, as in the comic depicting a woman's "Resting Bulldog Face." Others show the modern woman boldly flaunting social stigma, like the image of a woman wearing a tiny string bikini top with large middle finger symbols for panels. Some of the comics are just silly and exuberant, like the woman flying naked through the air on the back of a shark, and some are comically honest, like the one of a girl sitting on the beach, each of her three stomach rolls wearing a matching pair of sunglasses.

The delightful illustrations are a pleasure to scroll through -- a bold encapsulation of the modern woman's experience of life.
4.7
Score
Popularity
Activity
Freshness
Attend Future Festival