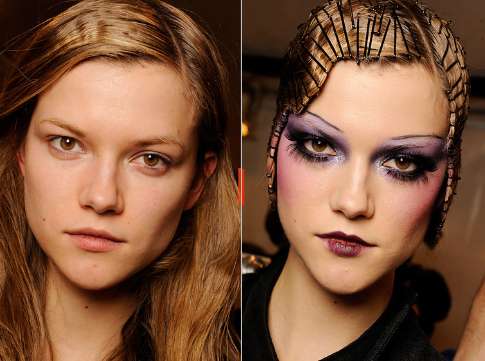 Models Before and After Hitting the Runway, With and Sans Makeup

Bianca — March 11, 2009 — Fashion
References: themoment.blogs.nytimes & neatorama
Share on Facebook Share on Twitter Share on LinkedIn Share on Pinterest
Some of the world’s most fabulous makeup can be spotted on the world’s runways, but because most of the images and video we see of the models is taken from a distance, we miss out on the detail. We also don’t get a chance to see what lies under those layers of caked on color, which can leave us particularly curious after seeing the lavish makeup slathered on during haute couture shows.

Thanks to Greg Kessler’s fashion photography, we can see what the models look like before and after being made up for each fashion show.

“The Moment, the New York Times fashion blog, posts these together so you can slide back and forth from one image to the other,” Neatorama says.

The site has a little slider across each image, allowing you to drag it to expose different areas of the face to see the cosmetic differences more clearly.

It’s neat to see models without makeup; yes, they’re beautiful, but without cosmetics, most of them aren’t the whiplash-worthy sites we see in magazines or on catwalks. Then again, some look much better without the freaky couture makeup some designers have them painted in.
6.3
Score
Popularity
Activity
Freshness
Jeremy Gutsche Keynote Speaker

Contrasting Celebrity
Before They Had Stylists: Anna Faris to Madonna
play_circle_filled

Before and After Drug Use Photos
Shocking Anti-Meth Campaign