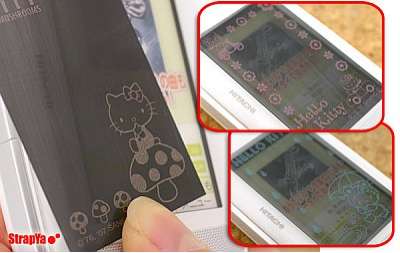 Bianca — August 28, 2007 — Tech
References: trendcentral
No one likes prodding eyes, a head reading over their shoulder, or having their privacy invaded. This has applied to the paper world for centuries, so it's no surprise that cell phone privacy is important to consumers too.

"Even more so than in the U.S., people in Japan are overwhelmingly addicted to text messaging, mainly because making private cell phone calls in public is considered extremely rude," IG Central reported. "However, overcrowded public spaces such as the subway are not always the most private, so it has become common practice to use stick-on cell phone privacy screens which are thin, tinted plastic screens (similar to iPod protectors) that make it impossible to read a cell phone screen from any angle but straight on."

Surely the Hello Kitty's Screen protector will be a huge hit in Japan -- they're cute, fun and let you express your love of all things Sanrio.
2.4
Score
Popularity
Activity
Freshness